I had planned to attempt the linear route of the Glyders and Tryfan route that G4OBK (Phil) had done back in July 2017. A good friend of mine Mike (not licensed yet but soon) asked if he could accompany me. I was going to be glad of company on the route, as this was going to be the longest SOTA route I had ever taken part in.

Mike came to my house in Telford and we headed to North Wales on the Bank Holiday Monday 26th August to stay in a premier inn over night to make the day a little easier. We arrived in the Bangor area at around 4 pm so we decided to activate GW/NW-070 (The Great Orme) to give Mike a brief experience of what SOTA is all about. He enjoyed it, as well as the following day. Hence the reason for him taking his Foundation license.

Our route as seen from the centre photo above, the total distance walked was 11.7 miles and with the three activation's took us about 10 hours.
We decided on parking at 53.146556, -4.099415 and take the direct route up the tarmac road to the Marchlyn Mawr Reservoir. This is a 40 minute walk slowly going up hill all the way. From here the ascent is up all the way and if you are not sure yes it is not an easy route.

We managed to arrive and set up my Yaesu FT-270 Handheld and my homebrew Yagi for 2M FM and started calling CQ SOTA at 09.17 am local time. My first and not surprising QSO was with G4DQB/M (Geoff). He had known of my plans and was waiting to chase on all summits. This followed by an additional 8 QSO's including our good friend GW4VPX (Allan) and also EI9GLB (Jim). I told him that I had not heard him on for some time.

Our second summit of the day was going to be

We followed the path from Elidir Fawr  North East around past Foel Goch but decided on staying to the lower track. The journey took us about one hour 10 minutes to arrive, we had decided as it was 11.45 am local it was time to set up and have dinner before calling CQ.

As we still had plenty of time left in the day and this summit cover's a large area I decided on playing on HF as well as 2M FM. I set up the SOTABeams linked dipole ready for 40M then started calling CQ SOTA on 2M FM. Yet again the first call of the activation went to G4DQB/M (Geoff), followed by my first S2S. This was with G4VFL/P (Andy) on G/SP-011 followed very shortly after with GW4HQB/P (Phil) on GW/NW-039. After 7 QSO's I decided on trying my luck on the FT-817 with 40M. I had a quick look at my phone and saw OE5YYY/P (Sylvia) & OE5AUL/P (Peter) were both on OE/KT-389 Sso that was my first HF S2S's. Just as I finished I heard MW6BWA/P (Vicki) & MW0JPL/P (Rod) on GW/NW-015 on my handheld calling CQ so reverted back to 2M FM.
My final S2S on HF was with HB9BIN/P (Juerg) on HB/SG-054. I also managed 9 further QSO's including EA2DT (Manuel) a frequent chaser. 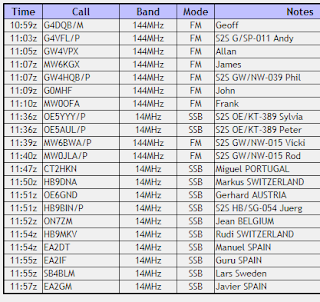 On we went towards Glyder Fawr and this is probably the hardest summit I ever been to. The journey took as past the Devils Kitchen at the base of the ascent. Then from here is was loose stones all the way up to the summit. There were a few walking groups on the way up and down, it looked to me as though everyone was having a hard time of the route. There are plenty of zig zag's that need to be completed.

The clouds had been creeping up on us over the last hour and managed to catch us just as we approached the summit. I had never seen any other landscape like this, it looks more like on the moon. As the weather was turning and we still had one other summit to activate I decided a quick 2M FM activation was the way to go.
I started to call CQ SOTA and was answered by G7OEM (Tony) first followed by a further 8 QSO's including a S2S with GI0AZB/P (Ian) on GI/MM-006.

We left the summit at 3.00 pm and started towards Tryfan, with in 100 yards of leaving the summit I tripped and twisted my right ankle. This was the end of activation's as safety comes first and we made our way slowly down the route we had planned to meet the taxi but minus the last summit.

Thank you Mike for a great day and great company, our next activation together will probably be Snowdon in October.

My first visit to Carnedd y Filiast to add another unique summit to my ever growing list. I left home (Telford) at 7.00 a.m. and headed towards Bala North Wales. Once I arrived at Bala I turned onto the A4212 and started towards the Llyn Celyn Reservoir.
2 1/2 kms before you arrive at the reservoir turn right onto the B4501, Follow this for another 3 kms and turn left at Nant-y-cyrtiau. From here the track is single lane with only a few passing places in parts. This track is about 9 kms long and you have to open 4 or 5 gates on route.
I eventually parked at the foot of Foel Frech at 9.15 a.m.


The weather was great around 25 degrees but the bog walking was not my favorite. I have uploaded my GPX route on SOTA Mapping project. I would use my descent route for ascent and descent if I went again.
I managed to have everything set up and had a coffee by 10.55 a.m. The route took me just a little over an hour. 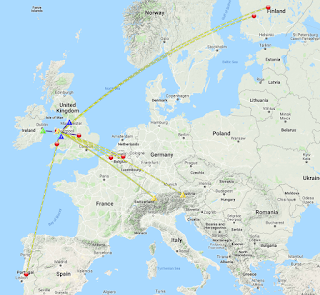 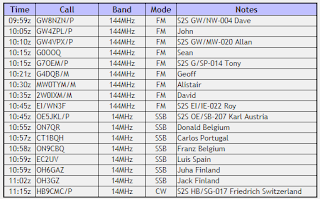 Our final day of the tour, back into Belgium and the route home.

We had planed two summits for the last day but added this one as it was on the way.

This summit is right by an old disused air field, the small forest around the air strip is out of bounds as instructed by ON7DQ (Luc), so we operated on the track.
The route from Luxembourg took us through Bastogne and as this year is the 75th Anniversary of the Battle of the Bulge there were plenty of sights to look at.

After a short stop in Bastogne we headed to the summit. The turning near the monastery is at 50.024921, 5.406010 from here just follow the track until the T junction and turn left and follow this until you are near the second tower. All directions from Luc and they worked really well thank you.
I set up my dipole spotted myself and started on 20M, only two QSO's so I tried my luck on 40M and managed a further 11 QSO's, including two S2S's with DL/G1INK/P (Steve) on DM/BW-321 & GW4TQE/P (John) on GW/NW-054. my last was the legend himself ON7DQ (Luc). 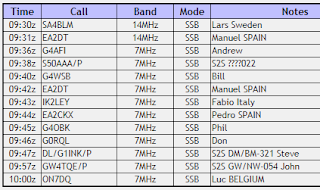 This summit is only 100 M from the French boarder, the weather was fantastic, temperature was around 35 degree's and not too many visitors at the very large unusual tower. We decided to set up on the car park as there was only one other car there.

We decided to have lunch before I started calling CQ, a few nice fresh rolls and cup of coffee. It was a great pick nick hi hi.
I was ready to start calling CQ now so I decided to try 40M again as it was the best band on my last summit. I managed 8 QSO's including two S2S's again, this time OK2PDT/P (Jan) on OK/JC-010 & G4ZAO/P (David) on G/TW-001 on CW.
After just over 30 minutes we decided to call it an end and head towards our last summit.

This summit was about a 40 minute drive from our last summit and the time went by very fast. The air con was on full as I think it was 38 degrees outside. We parked up just in the small forest about 10 meters from the road side.

Just a short 5 minute walk into the woods and there is a small wooden shelter, we set up on the track just outside this. Again I opted for 40M, I just had a quick check on SOTAWatch3 and saw that DL/G1INK/P (Steve) was on DM/BW-256. I gave him a call and managed my first S2S with him from this location. I also had a S2S with DL3SBA/P (Lutz) who I had met on our first summit near Friedrichshafen. This followed with a S2S with SV2RUJ/P (Stavros) on SV/TL-002 and my final QSO of the tour was yet another S2S with DL/G1INK/P (Steve) again who had  managed to get to his second summit.
This was the end and Michelle asked if there were any more summits near that we could do Hi Hi I think she is hooked.

A big thank you to all of my chasers for making this Tour a great successes. I hope to do this again next year. 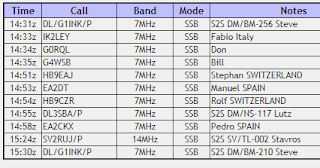 Our first visit to Luxembourg for over 29 years, we last visited back in 1990 during my time serving in the British Army.

I had offered Michelle a day off from SOTA so we could spend the day in the city of Luxembourg itself. We had left our hotel in Germany at around 9 a.m. and started our journey North West. The SatNav had took us through France and we ended up paying around 30 euros in tolls (be warned).


We stayed in Luxembourg for just over an hour and then Michelle said shall we go back to the summits? I said are you sure and she said yes I am tired of shopping already hi hi I was very glad.
We parked at 49.670817, 6.206297 as suggested by ON7DQ (Luc) on his blog. I missed it the first time as it is very small so I had to turn around drive past it and turn around again as Luc said your cant turn left into this place.

The walk from the car to the activation zone took us about 15 minutes slow walking due to the temperature. I set up my dipole on 40 M, spotted myself and started calling. I managed 10 QSO's including a S2S with HB9BIN/P (Juerg) on HB/NW-011. We only stayed about 15 minutes as it was very hot.

Our second summit was very close to the hotel that we had booked into for the night so had decided to activate this one before we went to the hotel.

We left the village of Erpeldange and headed south up the track towards the summit and saw a local farmer with his tractor and asked if it was ok to drive up to the summit and he said yes it was fine.

The tracks are fine to drive on and we arrived within 10 minutes.We found a hard standing to park up and walked 100 meters or so up to the AZ. I managed 11 QSO's including 5 on CW all on 40M. We stayed just over 30 minutes then packed up a headed to our hotel which was in Wiltz so only 10 minutes or so driving from the summit. 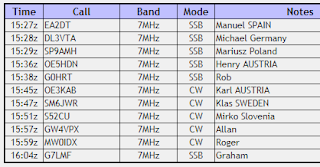