This weekends activation firstly took me to Tal Y Fan around 4.5 miles South West of Conwy North Wales. I had planned to leave home at 7 a.m. but I woke a little earlier than expected and left home at 6.40 a.m. This gave me a nice start to my route, most of the way it rained and I was thinking of all of the summit to summit activators that had planned to start at 6.30 a.m. ( glad I was in my car).

The weather was not too bad, there was a lot of low cloud cover but at least the rain had stopped. Most of the snow had melted and the temperature was about 10 degrees when I left the car. The summit was a little windy so I set up on the seaward side of the wall near the summit. I started my CQ SOTA calls at 9.42 and was answered right away, this turned out to be a very nice activation with 18 chasers, 2D0FHG (Frank) & MDOIOM (Mike) both from Isle of Man and I think the furthest contact was G6ZET (Dave) in Bolton-le-Sands Lancashire some 75 miles.

I spent just under an hour and a half at the summit with setting up, operating and pack away, it didn't seam that long and this put me a little behind schedule for my next summit Great Orme. So I made my descent carefully as the cloud cover was starting to get bad and the ground was very wet from the melting snow. The descent took me nearly 30 minutes as I didn't want to end up with an injury. I did spend 5 minutes talking to two small groups of hill walkers as they were very interested in the poles sticking out of my rucksack. Public relations for SOTA & Amateur radio lol. 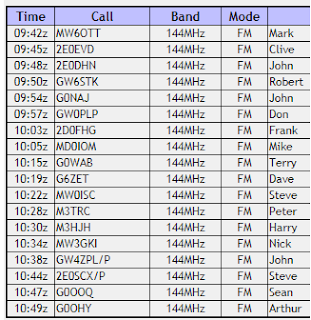